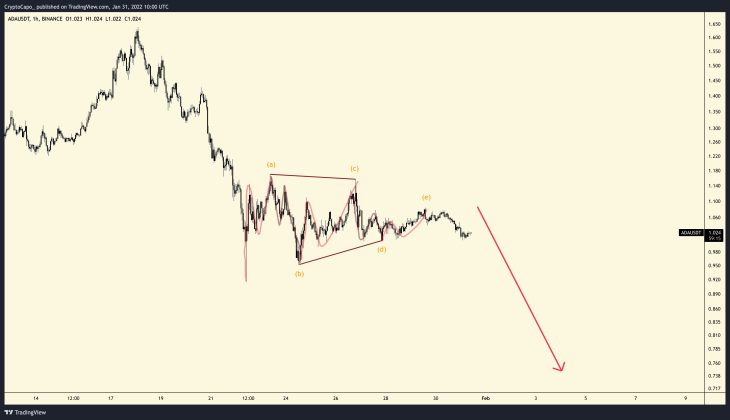 Capo, a pseudonymous crypto analyst on Twitter, has told 240,000-large following that crypto assets are yet to come out of the bearish run.

Change of tune on the leading cryptocurrency

The analyst was initially bullish on Bitcoin, predicting that it would first rally beyond 40k before potentially seeing a bearish outturn. However, he has now changed his view and instead sees the flagship cryptocurrency directly plunging.

“Whales are adding supply and removing bids below the current price. It seems that it will go just straight down without touching 40k. I’ve sold a little bit more. Currently 85% in USDT, ready for what could be coming. Stay safe,” he said yesterday.

Capo projected that Bitcoin’s bearish trend would likely stop at around 28k to 30k, a figure he anticipates could still go much lower should the liquidations be inadequate.

“This would be the ultimate capitulation candle. Main scenario remains 28k-30k, but if there are enough liquidations, we could expect the wick going much lower. Be careful. I’m ready for everything.”

On Saturday, the crypto investor noted that Cardano’s ADA was forming an apparent bearish triangle. By yesterday, ADA had started forging a path rhyming with his prediction.

Responding to a question from one Twitter user, Capo also theorised that the token could establish support at $0.80, and should it plummet further, its next support would be at $0.65. He also confirmed that he had not found a buying opportunity zone for ADA, but his decision would depend on how altcoins would perform relative to the king crypto.

The widely followed crypto analyst is more bearish on altcoins than in Bitcoin. He says that though these digital assets have outperformed BTC in regards to the recent market drop-off, they remain weaker than the leading digital asset.

Capo tabled dominance as evidence arguing that altcoin markets could drop by up to half in the coming days.

“Altcoins look even worse than $BTC. With the Bitcoin dominance forming a triple bottom, and the OTHERS (altcoins) chart wanting to retest the range low, it wouldn’t surprise me to see a 50% drop in altcoins in the next few days. Stay safe.”

As of writing, according to CoinMarketCap, Bitcoin has consistently stayed above $38k in the last 15 hours. It is currently trading at $38,380, 3.77% above its price 24 hours ago. On the other hand, ADA is holding just above the $1 psychological support, at $1.053.

Acid, Bitcoin mining and a bad trip to North Korea