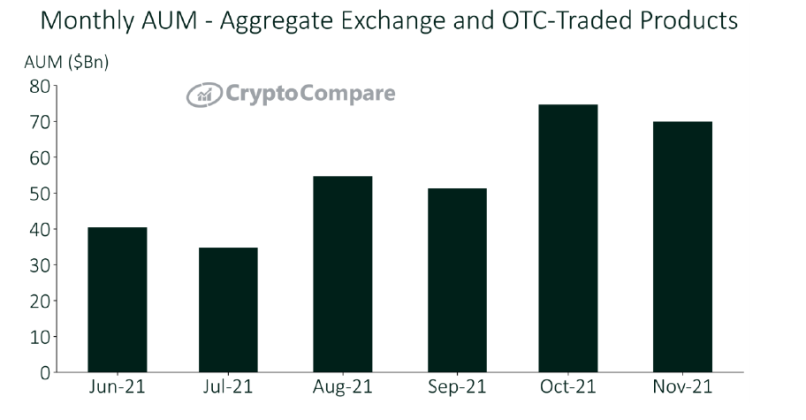 While Bitcoin’s (BTC) position as a viable hedge against fiat inflation continues to attract investors, new data reflects a change in sentiment as Ethereum (ETH) and other cryptocurrency products pick up steam against falling Bitcoin assets under management (AUM).

The Bitcoin AUM market fell 9.5% to $48.7 billion in November, marking the year’s largest month-on-month pullback since July, according to a CryptoCompare report. On the other hand, altcoin-based crypto funds such as ETH saw their AUM rise 5.4% to $16.6 billion.

As shown in the above graph, the total AUM across all digital asset investment products has fallen 5.5% to $70.0 billion, which coincides with the ongoing bear market ever since Bitcoin achieved an all-time high of above $65,000.

As a result of the 9.5% fall, the Bitcoin AUM market represents 70.6% of the total AUM share. Ethereum’s AUM, however, rose 5.4% to $16.6 billion while AUMs representing other crypto assets were up by $2.6 billion.