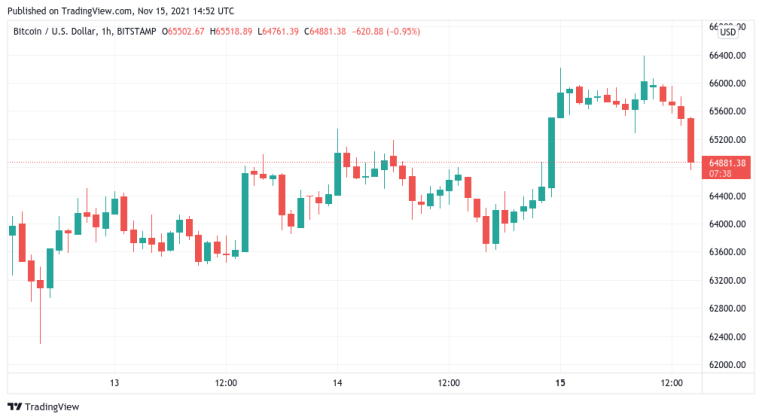 Bitcoin falls from $66K highs, Tesla down 3% after Elon Musk warns he could sell more stock

Bitcoin (BTC) tested $65,000 as support as United States markets opened Nov. 15 with a weekend surge that ended in a retracement.

Data from Cointelegraph Markets Pro and TradingView showed BTC/USD giving back a chunk of its overnight gains, having hit local highs above $66,000.

In a move away from recent patterns, the pair failed to rally further into the start of trading on Wall Street, instead eyeing April’s old all-time high.

For Cointelegraph contributor Michaël van de Poppe, higher levels were more important for the preservation of an overall bullish momentum in the short term.

“Still looking at a potential rising wedge structure here,” he summarized, alongside an annotated chart.

Elsewhere, attention focused on indicators, hinting that there could be more room for price growth before classic cycle top signals appear.

Highlighting the Spent Output Profit Ratio (SOPR), Philip Swift, creator of data resource Look Into Bitcoin, contrasted the state of the current market with the “overheated” atmosphere of early 2021.

“These on-chain daily p/l levels are so low. Yesterday was close to negative again. We are far from the overheated levels that you see on left-hand side of chart,” he commented.

“With funding pretty flat too, probably not much longer before we start meaningfully trending up again.”

SOPR takes a look at the price at which coins moved over a particular time, and is useful in determining investor behavior at different segments of Bitcoin’s price cycles.

Ether (ETH), Solana (SOL) and Polkadot (DOT) were the leading major altcoins on the day, standing out from the flat progress of other tokens.

Related: ‘Bull market distribution has begun’ — 5 things to watch in Bitcoin this week

On traditional markets, Tesla (TSLA) fell over 3% at the U.S. market’s open, a move which saw copycat behavior from Bitcoin, as was the case last week.

Ex-BitMEX CEO says short ETH before Merge, but should you?