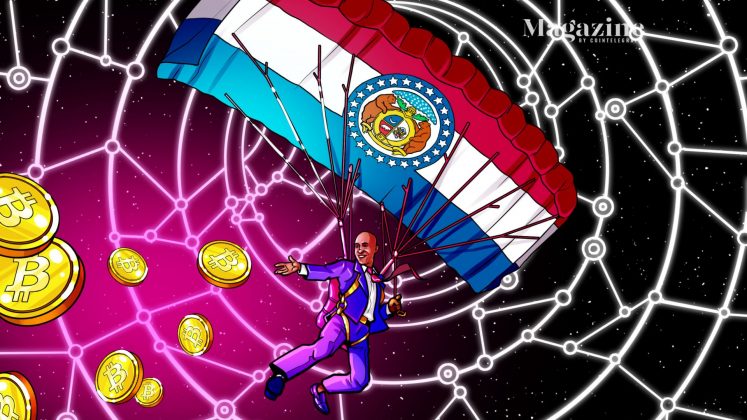 Cool Valley, Missouri, a small town of about 1,500 in the St. Louis County area, found itself the subject of international attention recently after its mayor, Jayson Stewart, announced that he planned to give each resident up to $1,000 in Bitcoin.

Stewart, a passionate environmentalist who spent years cleaning up the world’s oceans and ran on a platform of correcting old mistakes, believes Bitcoin education holds keys to growing the prosperity, well-being and sustainability of his town. Just as he dreams of a world without the environmental damage caused by irresponsible litterers, he imagines a future where Bitcoin cleans up many of the ills of the financial system.

Hoping to soon see a Bitcoin-friendly bank in town, Stewart sees Bitcoin as an avenue that can lift the town’s fortunes by way of increased wealth and business opportunities like mining facilities, and even Bitcoin events.

“A lot of it is about fixing the wrongs of the past financial system. In the past, we didn’t have access to this amazing technology that we have today when it comes to our financial system and storing our value.”

Stewart’s plan to dole out Bitcoin to the people of Cool Valley is already fully funded. He explains the plan is being paid for by private donors, with the aim of spreading adoption and educating users. “As of right now, the project is fully funded for $1,000 per household,” he confirmed, adding that the town has received further donations because “the story got so popular in a way that I never anticipated.”

A day in my life through the eyes of @JaelinCollier pic.twitter.com/N1mAerlvT7

Though Stewart believes it would be “very wise for a town to hold parts of its treasury in cryptocurrencies,” he explains that “there are legal obstacles to doing that, many of which are laid out in the state constitution in regards to towns and cities investing in assets.” He makes it clear that he is first and foremost interested in seeing regular people, rather than government entities, benefit from Bitcoin. The more people that hold a stake in the Bitcoin network, the more powerful it can become.

“What really excites me, and what I’m working on, is getting regular people to hold Bitcoin, and for them to really benefit from the appreciation of holding an asset like that.”

Stewart has encountered a mixed set of reactions from the town’s residents, from excitement and curiosity to confusion, with the latter being common among older members of the community. “They have a lot of questions about ‘what is it?,’ ‘how do I store it?,’ ‘how do I get access to it?’” he lists.

The distribution procedure is not yet finalized, but education is among the project’s key goals because, in order to get their BTC, residents need to understand what it is they are receiving. For this, there are plans to organize workshops or similar learning opportunities. “We’re going to get people storing their own Bitcoin as quickly as possible,” the mayor declares.

Missouri Mayor,@coolvalleymayor, “Into bitcoin since 2015. I use to work for a tech start-up, and we were virtual assistances for wealthy clients, and one of the coolest things I noticed was that this start-up let our clients pay in BTC in 2015” cc @BitcoinMagazine @ck_SNARKs pic.twitter.com/MGGUru3bki

Cool Valley is home to people from a variety of economic circumstances, so “$1,000 looks like different things to different people.” The desire is, however, for residents to hold their coins for some time instead of selling immediately, in part due to Stewart’s transparent belief that they will rise in value over time. Patience is a virtue, after all. In order to encourage this patience, there are plans to offer residents an option of a larger payout if they agree to hold their coins for a set amount of time, with a smaller amount given to those who want to sell.

In addition to learning about Bitcoin, Stewart’s initiative is likely to inspire other indirect benefits to the community. For one, it is likely to introduce many residents to investing in general, which may bring many benefits in the future. Computer literacy is another area that is likely to see improvement on account of the Bitcoin incentive, and the new users are likely to begin learning about other cryptocurrencies and blockchain applications as well. As such, it is likely that the move will ultimately inspire some residents to seek careers in the blockchain industry.

In his early 30’s, Stewart first interacted with Bitcoin in 2015 while working as an assistant for Magic, a San Francisco based company that often saw “very, very wealthy clients” send Bitcoin to the company’s wallets, which Stewart would then convert into fiat in order to purchase various goods. Though he did not have much in-depth understanding of the cryptocurrency, “I thought it was cool internet money,” he recalls.

When he was a child, Stewart dreamed of being a nature photographer and owning a wildlife sanctuary. That’s why later in 2015, he left his job at Magic to pursue a lifelong passion for environmental restoration and wildlife rehabilitation through his new company, PL28, which he operated from Cool Valley. PL28’s mission was to clean up the oceans, a calling that was “the focus of my life” for the next several years until Stewart ran for mayor in 2019.

“Right up until I decided to run, I was just pulling plastic from oceans, rivers and different waterways — to try to make the wildlife habitat for marine life a little bit better.”

Through PL28, Stewart has helped with ocean cleanup in places including the Philippines, Haiti, the Bahamas, Los Angeles and Singapore. He explains that the cleanup process is different according to the type of ecosystem at hand. “Out at sea, you’re usually going to get mostly abandoned fishing nets” which continuously trap and kill wildlife, whereas in a river environment like that of St. Louis, “you collect a lot of plastic bottles like milk jugs,” he says.

Though he loves to spend time with marine wildlife, he regrets that the work of ocean cleanup was “a lot more logistics” such as coordinating volunteers, as opposed to direct work in the field on his part. All told, Stewart “worked with people in 47 different countries to pick plastic from the ocean,” with that plastic usually processed into usable plastic and made into premium goods made of the reclaimed material.

Today, Stewart has moved on from active ocean cleanup, but his adventurous spirit of cleaning up the messes and mistakes of the past continues to drive him.

After high school, Stewart studied psychology at the University of Miami from 2008 to 2012. During his studies in 2011, he founded a record production company Pink Fader with his freshman-year roommate. The duo saw some apparent success because an act under their label “ended up getting Grammy-nominated, which is cool, and we had a couple of songs go into the top 50 on the charts,” Stewart recalls with a hint of pride.

For Stewart, who moved around a lot first with his family and later due to his entrepreneurship activities, Cool Valley “has been the most consistent place” through various parts of his life. Young and armed with fresh ideas, he decided to run for mayor in hopes of improving the services and revitalizing a suffering business district.

“I was going to create more of a haven where humans and wildlife could live and interact together, safely, for both parties.”

Being mayor is a great honor, because “this little town that I grew up in wants me to be their representative and to be their leader.” He describes the job as having a particularly broad scope of responsibility far beyond his previous work, feeling a strong sense of responsibility for the well-being of the townspeople. He even has the ability to grant pardons for certain offenses, which he announced for “every person convicted of nonviolent offenses involving cannabis and/or psilocybin mushrooms” last year in a move that earned him commendations for “groundbreaking work to fix the harms of the War on Drugs.”

On the other end of the spectrum from big picture ideals, “there are always little things that we would talk about as well, like a pothole on the street or whatever,” he says of the things that keep him busy.

Though there is not yet a petition to rename the town, it is quite conceivable that the Bitcoin effect will touch Cool Valley in concrete ways. While the town already has a Bitcoin ATM, there are many more opportunities to consider. “We’ve had some people reach out about opening a mining facility,” Stewart beams, adding that “I’m trying to get a Bitcoin-friendly bank over here.”

As luck would have it, Stewart has just joined the Advisory Board for the Midwest BankCenter, which is a locally owned bank with nearly $2 billion in assets. “They’ve been meeting for 100 years, but I just had my first board meeting with them like three days ago,” he laughs. Asked if they knew him as the ‘Bitcoin guy,’ Stewart proudly stated that “they do now!”

From his perspective, Stewart senses “a cautious sort of optimism” in the local banking sector. While it’s clear that they want to avoid risks, “they also enjoy the potential opportunity for big upsides in their investments.”

Considering the number of donors, it looks like there will be money left over after the distributions to residents. With these funds, one idea Stewart is exploring is solar lighting and other energy efficiency initiatives in Cool Valley. “There’s a lot of fear, uncertainty and doubt when it comes to the environmental effects of Bitcoin,” he admits, adding that he wants to set a positive example of the good that Bitcoin can bring.

With the University of Missouri-St. Louis campus bordering Cool Valley to the South, the town might be a great place to host a Bitcoin conference, or even a technology hub of sorts one day. Mayor Stewart agrees, saying “I think that could be a pretty nice outcome — that’d be super cool.”