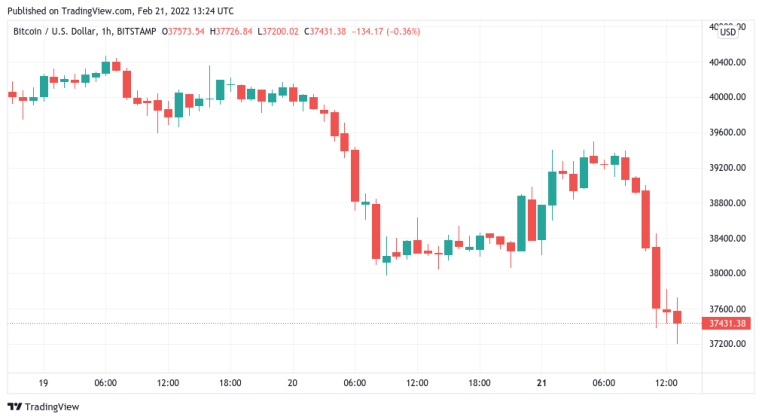 Data from Cointelegraph Markets Pro and TradingView painted a grim picture for BTC/USD Monday, as $38,000 support abruptly vanished after holding throughout the weekend.

While threatening to invalidate analysts’ hopes of a bottom being in, the chances of a rebound to $40,000 were nonetheless good, one argued.

“Not expecting this leg to go very deep tho, should see a bounce towards 40k soon,” Crypto Ed told Twitter followers.

In a video update on the day, Crypto Ed had forecast a multi-leg downtrend continuing, with $40,000 forming the target of a relief bounce before another dive ensued, this even having the potential to take out $30,000.

“If we somehow manage to get back above $40,000 and go up, then I’m bullish; otherwise not,” he concluded, adding that it would take a “miracle” for such a bullish case to come true.

To the downside, a silver lining came in the form of increasing bids at $37,000 appearing on the Binance order book as BTC/USD drifted lower.

Smaller buyers, however, were in two minds at current levels.

“Some bid liquidity in the $20k range has faded upward to the $30s, but want to see a bigger concentration of bids to get market buyers off hands,” Material Indicators creator Material Scientist added in comments on a chart showing the latest action.

A Wall Street holiday, meanwhile, meant a lack of convincing volume on crypto markets Monday, this being apt to exacerbate moves in any direction due to thin liquidity.

Macro cues, however, continued to flow in, with developments from the Russia–Ukraine conflict primed to unsettle already nervous sentiment.

Reports of death on the border came as European stock markets jittered, the FTSE 100 down 0.5% in London and Germany’s DAX down 1.3% on the day.

Another crackdown on tech in China fuelled separate troubles for Asian markets, with Tencent shedding over 6% during trading.

The tech stock rout was highly reminiscent of July 2021, the period during which Bitcoin retraced the entirety of its year-to-date gains to bottom out at near $29,000.

Bitcoin price dives pre-FOMC amid warning $17.6K low was not the bottom